“This will be my last entry for a little while. I will be taking a break. i thank the many people on facebook who have written to tell me how much this blog has helped them sort out things in their own personal lives. you inspire me to write more..and i will 🙂 ”

“If love is blind…then a relationship is hindsight at all times”.

Think about that…what you thought you knew, wasn’t the case…it wasn’t what you believed in your heart it was….and just who is to blame for your blindness? You? Who put the other person on a pedestal that they NEVER asked for? Or is it the other person who lied because they knew you would believe them out of blind love?

A conundrum! One I know quite well 🙂

I actually don’t like people who lie. I fall short of using the word “HATE” because I don’t take every lie personal…unless it’s personal 🙂 The truth is that lying is a natural defense mechanism. It’s a response to avoid a situation.

I’ve boiled it down to this: people lie when there is an important situation or a person that they really care about.

IRONICALLY….we seem to tell more TRUTH when we don’t give a shit.

Lies have their place. Make no mistake, many people can’t handle the truth. The PROBLEM comes when you, as a person who lies, runs into someone who asks you NOT to. EVER.
Lying being such a habit to you…keeps you from believing that this new and rather unique individual, can actually handle the truth.
And so you lie…because its what you’re used to. After all, it’s worked for you thus far and PLUS you care about this person and don’t want the truth to drive them away. Now this truth could be LIFE THREATENING…but that’s the reason you would lie. This truth is big…it’s brutal…life threatening it may be, but the lie is safer.

See inherently, lying is selfish. It is selfish because you feel that YOU know what’s best for the other person, when no one asked you to be the other person’s caretaker or legal guardian. They simply asked for the TRUTH, something that you couldn’t seem to give when it mattered.

And something i’ve noticed a LOT…and I mean a LOT…is that people who lie usually always believe that someone is lying to THEM. No matter what you say, its always questioned, never truly believed.  That’s just some sick ass Karma man. That’s Karma that will drive you insane. Because liar or not, you gonna have to trust someone sooner or later and the moment that happens, its going to scare the shit out of you because THEY could lie to you and you could believe it 🙂 ….Karma man…

Please don’t confuse this with people who always feel as though everything you say or do has a double meaning….those are people that have been lied to REPEATEDLY and they are damaged. It takes patience to deal with these people, but if you get their trust, you cant ever betray it or they may do some crazy shit 😦

Sometimes…well, inevitably, I think, we are all going to date or love someone who lies to us at one point. Someone who will  lie to us when the truth matters the most. I truly think that those of us who have been lied to are partly to blame because our LOVE  makes us so ripe for the lie. But there are those of us who are very in tune with the person they are with, and you can tell that your partner is hiding something or not telling you the full truth.

So you ask for the truth, and they lie…and we believe because we WANT to. Again, WHO is to blame? As Homer Simpson said “It takes two people to lie: one to lie and one to listen” 🙂

I used to lie a lot as a kid, but got caught so many times that I just started telling the truth and accepting the ass whipping. Even my mother said that if I told the truth the ass whipping wouldn’t be as bad….and dammit she was right. I mean I still got beat with an ironing cord, but it didn’t last as long.

I took that mentality with me…I’m not a fan of lying to people. And with GREAT dismay, I learned that many people ARE. Apparently lies make the world go round…and it’s been going on for so long that people accept it. Back in my day it was called  “JIVE’ N'” someone (I’m a 70’s baby thank you very much)…then it was called “BULLSHITTING“…and NOW its called “Political Correctness” 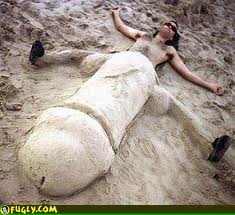 The way i see it, lies are like a building made of sand. Sand is easy to work with, it’s soft, it holds a shape really well and molds into whatever you want to be. But once it starts to rain, it begins to fall apart. You put another building in its place, but as long as it’s made of sand, it will always melt away when it rains. Everyone loves sand…because it EASY to work with.

See dat’ metaphoric shit son?
A lie is a building made of sand but it can’t stand the fucking rain.

But when you build a house with BRICKS, or STEEL or WOOD; hard materials that hurt when you pick them up, scraping your hands and  making you tougher for using them,…well you have a strong building that stands up to rain, hail, everything short of a tornado.

Truth is a STRONG building, with a great foundation. You should want to build ANYTHING that way…see what I’m saying?

Look at this world built on political correctness and shady dealings…look at these high divorce rates and high STD infection rates…
People are lying to one another damn the consequences. And the consequences are SEVERE AND GRAVE.
No wonder the world changes so fast, that’s how fast there is a new lie to replace the old one.
Because sand just doesn’t last long.

So what you HOPE is that you find someone who has your back, who will give you TRUTH in this world of constant LYING. When you find that person, you tend to hold onto them…and IF this person turns out to be a liar or even tell one BIG lie…you just…..lose….I want to say faith…but HOPE is the word that hits hardest.

You would think I’ve been lied to a lot PERSONALLY. But no, not a lot, just key times. Just times when it mattered the most. And what I hate, is that I had a gut feeling when I was being lied to each time, but I gave the person a chance to tell the truth. Not to BURY themselves but to fucking SAVE themselves….and US.  In each case, LATER I got the truth, its too late then. The damage was done.
You could point the finger at me, because if I knew they were lying then why deal? Simply because you aren’t 100 percent sure and I wasn’t in each case. But unlike many lovers, I wasn’t looking for a lie to shut me up. I wanted the truth. Cold and brutal….just the way I love it.

But its not easy to tell the truth, especially when you care about the other person and don’t want them to leave. Especially then. But if you weren’t so used to lying, then the lie wouldn’t be the first thing that you say….you would at least stutter 🙂 But most people don’t stutter….
The lie is common-place…it saves the day….but what about tomorrow?

I’ve always felt that I was  naturally different. I mean I didn’t try to be different like some people. You know, wear crazy shit to draw attention “look at my individuality” type shit. Actually, I’m a pretty low key guy. But I stand out like a sore thumb because of my mouth and the words I write and the things I do TO and FOR people.
I’ve been called handsome, beautiful, spiritual, great, a mans man, old school, lover, baby, true friend…all these things….by people who have lied to me at one point or another. So was I ever those things??

If I’m so special then I should be granted my fondest desire and that is TRUTH. No matter what.

Ironically, I become closer to the person who tells me brutal truth. It’s like I find a long lost friend, someone who understands. That’s what’s lost in the lie; the possibility that the truth would make us both stronger…apart and together.

Hmph. What a world.

It takes time to get over being lied to. Some people forgive and never forget. I like to forget but it happens on its own time. I mean hey, we all make dumb ass decisions. That’s just fact.
Of course, you never see that person the same way….I mean how could you? But its sorta your own fault, I mean they NEVER asked to be put on the pedestal you put them on. They are after all just a human being, not some sort of heaven sent angel. None of us are. All of the truthful and heartfelt praises and love YOU gave THEM…its a lot of pressure for MANY people. Those people dont want to disappoint those who put so much INTO them, they don’t want to make a boneheaded mistake and when they  do, they want to erase it. so I sympathize. Seriously I do.

TRUST can be rebuilt, as long as both people are willing to work at it. I know when guys get caught, we call it being in the dog house. Because you know your woman is mad at you and you gonna have to be real understanding about all her emotions for a long time. When you fuck up, you gotta face it or run from it. But if the other person is worth it, then you face it. its your bed.

And I have lied too, as an adult, but never when it really matters. Not when someone is asking you to “tell the truth, please.” Nah…that ain’t me…never has been…I don’t even have to worry about ever being like that cuz I’m just not geared that way. Now if I’m with someone who doesn’t want to know things, then that’s not ME lying. That’s just fulfilling a request. There are situations like that. some people know what they can or cannot handle, so they just rather not know.  But in honesty, I personally like things in the open…you know..so they can be DEALT with accordingly.

This wasn’t my typical post geared to women, but its something we can all relate to at one time or another. Someone you can TRUST…it’s such a beautiful thing when you have it. Because this world is ever changing…its nice to have someone you can count on.  No putting them on a pedestal shit… Just a human being who just happens to keep it real with you no matter what. A person who lies all the time?  I just don’t believe they can be trusted ever. But a person who has lied on occasion, is just not a natural liar…there’s some hope for them. SOME. And they may be worth trying to trust again, but they should know that they will be under heavy scrutiny for a while. But you guys could end up stronger as a result. Anything worthwhile takes time and effort, that’s truth.
Relationships …good ones..are built on truth. Just like we try to build our children on truth…to make them better than average.
I LOVE TRUTH. Give it to me. TRUST ME, I’m not made of sand.